from HTYP, the free directory anyone can edit if they can prove to me that they're not a spambot
< American Tobacco Trail
Jump to navigation Jump to search 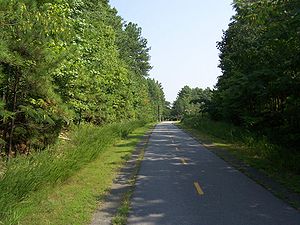 (from memory, north to south): 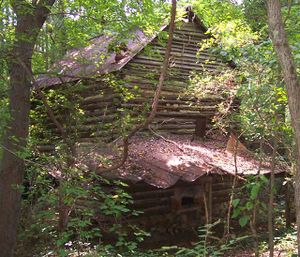 Abandoned log cabin in the woods about 1/4 of the way from the Cornwallis Rd. intersection to the MLK intersection, off the west side of the trail.

The South Durham section of the American Tobacco Trail is a former railroad right-of-way beginning at the south edge of downtown Durham (just beyond the NC-147 bridge over Blackwell Street) and reaching 6.5 miles south to a "temporary end" at NC-54, just across I-40 from Southpoint Mall.

To reach the current southern "temporary end" of the trail, you have to turn right several yards short of the end of the straight-ahead part of the trail (which mainly goes to the small ATT parking area at the shopping center entrance off Fayetteville Rd.) to get to the final section of trail. The turn is not clearly marked as being the official continuation of the Trail; you have to look closely at the signpost (which is on the left, opposite the turnoff) and notice the little arrow pointing to the right.

This stretch runs around through Southpoint Crossing, a gated community and shopping center (the trail runs behind the shopping center with a hill separating it from vehicular traffic) and over to NC Highway 54, a busy road with 5+ lanes.

There is a small gap between the two sections of trail shown in these maps. The second map shows mostly the south of I-40 section, but includes a little bit of the south Durham section.