The ArchiTECHS was a television show on The History Channel. Two pilots, one of which was broadcast, were filmed for a proposed series in which a team of innovators struggle to come up with unique design solutions under a suspenseful time limit. 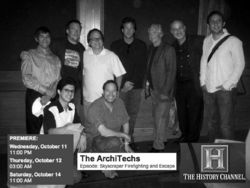 Promotions for the show had this to say:

Five geniuses are challenged: innovate fire rescue and evacuation tools for skyscraper disasters... and do it in 48 hours! Watch a small team of designers and visionaries form a high-tech think tank, racing the clock to shape bold, over-the-horizon designs for the future. With unprecedented cooperation from New York's regional fire departments, episode #1 culminates in a dramatic presentation to Former FDNY Commissioner Thomas Von Essen, one of the heroes of 9/11...

This episode was filmed half a year earlier, at the U.S. Army National Training Center at Ft. Irwin, California, where a somewhat different and larger team of "geniuses" were charged (by 4 star General Paul Kern) with the task for "designing the next humvee." Result? A super bad-ass concept vehicle. This episode has not been broadcast and it is unclear, as of January 2007, whether there are any plans to show that episode or offer it on DVD.