from HTYP, the free directory anyone can edit if they can prove to me that they're not a spambot
< T-Mobile
Jump to navigation Jump to search

T-Mobile's account management web portal is pretty horrible. Unfortunately, this is common a common failing of mobile carrier providers. General navigational awkwardness aside, here are some specific problems I ran into while trying to port an existing number from a phone that has been lost (probably broken) to a new phone just purchased.

(Some discussion of this page is here.)

There is no apparent way to port a new device into an existing account. The closest equivalent seems to be to create a new account and port the old phone number -- but this requires knowing your existing account number, which does not seem to be available (see next section for details).

Another thing that might have worked would be to add another line on the same number, but that has to be enabled from the device -- so if the device isn't available, you can't do it; catch-22.

Oddly, one inquiry directly to the check eligibility (for whether a number can be ported to T-Mobile) confirmed that the number could be ported, while another inquiry to that same page via a link in the account management portal claimed that it could not.

Note that the first (anonymous) inquiry apparently tried to display a CAPTCHA, which did not work on Firefox (nothing happened when the "check eligibility" button was pressed) but did work in Konqueror. The logged-in inquiry worked in Firefox, so presumably it didn't need the security of a CAPTCHA when responding to a known user.

This implies that the problem was not the issue of being able to port the number from the old account, but rather that T-Mobile does not want you porting numbers to a pre-paid account (at least, not via the web interface), since that was the only real difference between the two requests. (This was consistent with the fact that my earlier attempt to port the number while activating the new device received a message that the number could not be ported.)

This page says you can log into your online account either from a computer or from a desktop, and then look in the "billing" section (in which you will find a link to download a PDF which will give the account number) -- but there is no such section anywhere (see screenshot). Exploring all the subsections (including the ones related to billing) does not turn up any PDF links or the account number. (The mobile app was much the same in content, though laid out somewhat differently.)

My guess is that this is because the instructions only apply to contract plans that aren't prepaid, and prepaid plans have no "billing" section because there are no bills because everything is prepaid -- but this doesn't explain why you can't access your account number. 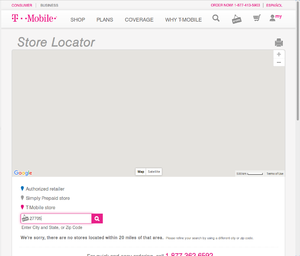 There is no store in Ba Sing Se.

The store locator page barely functions. On first loading it and entering any zipcode, it displays a blank map and text informing you "We're sorry, there are no stores located within 20 miles of that area. Please refine your search by using a different city or zip code."

However, if you then click the zoom-in button on the Microsoft Bing-generated map ("[+]" -- note that using the mouse scroll-wheel does not work), you will see a spinner near the bottom of the page. If it ever finishes spinning, the map will then display a set of markers showing locations near the designated area -- but without any other context (i.e. no map). A text list of locations may or may not then appear where the spinner was. By playing around with the [+] and [-] buttons you may eventually be able to find what you're looking for.