from HTYP, the free directory anyone can edit if they can prove to me that they're not a spambot
< Yamaha
Jump to navigation Jump to search

The Yamaha DGX505 is an electronic musical keyboard with 88 unweighted velocity-sensitive keys, a memory card reader, and a USB port. It has no MIDI port, although apparently the USB port provides much of the same functionality (presumably a computer is required). It comes with a bench and stand (looks like fake wood veneer over particle board).

I found this keyboard at Costco ($529.99 in May 2006; was $499.97 on 2006-06-10; by September they had dropped this one and were offering the Yamaha DGX620B for $700. As of Jan.19,2008, Yamaha DGX620B was priced at $879.99 at Costco.com). My first, second, and third impression of it is that although the keys are unweighted, the main piano sound was very playable, to the point of being comparable to a weighted keyboard. The piano sound itself is very realistic, with a sustain considerably longer than many of the "best" electronic pianos (the main piano sound on the multi-thousand-dollar Yamaha pseudo-grand-piano nearby didn't sound nearly as good), and among the many other sounds included were others of good quality as well. I am strongly tempted to buy this keyboard for recording purposes even though I have two or three other keyboards which would do almost as well, but am currently holding myself at bay. --Woozle 07:44, 17 May 2006 (EDT) (Note: we did end up buying it, and it has been good.) 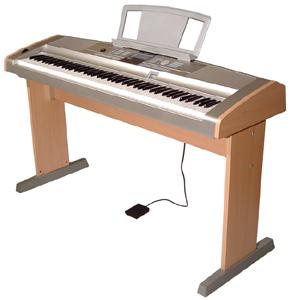