from HTYP, the free directory anyone can edit if they can prove to me that they're not a spambot
< User:Woozle
Jump to navigation Jump to search

Mixed signals from the app: are we connected, or trying to connect? 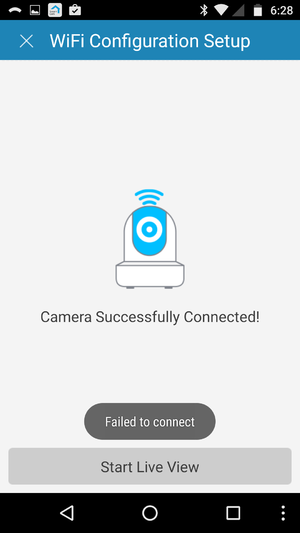 We're connected, but we're not connected. Most software designers, I should think, would simply update the "Camera Successfully Connected!" text to reflect the current status -- or, to be really advanced, show a log of time-stamped events (connected! / signal lost / attempting connection... / failed). Apparently Android developers have to do things differently.

We got this from Home Depot, but it seems to be available from a number of other big-box retailers including OfficeDepot.

I ran into a show-stopper almost right away in that it refused to connect to the wifi network. What's worse is that although we have no less than four SSIDs it could have tried, it would only show me one -- which seemed to be chosen at random -- so I couldn't easily cycle through all the possible SSIDs to see if any of them could connect.

One time it even showed "Select a Wifi" in the SSID blank, as if I could somehow pick from a list. I tapped and slid every way I could think of, but it acts like static text regardless of what it is saying.

I was able to try three different hubs (two at our house and one elsewhere) with no luck.

I also tried it with a wired connection. That requires you to enter the existing user/password credentials -- although it looks like it's asking you to set them, and I'm not sure how you set them when going this route -- and then it gives you a choice of networks (though only two of our three SSIDs were listed). At that point, I was able to get it to connect to one -- supposedly -- but after disconnecting the ethernet cable (as requested by the instructions), I still couldn't access the camera.

If the camera could have operated solely over the ethernet connection, I might have been tempted to keep it -- but as it is, I absolutely cannot configure it successfully, so I can't use it. We'll have to return it.

Also, while Android interfaces in general kind of suck, this one is no worse than average, and maybe a little better -- but I couldn't explore all the functionality due to not actually having a working camera.