from HTYP, the free directory anyone can edit if they can prove to me that they're not a spambot
< Schumacher
Jump to navigation Jump to search 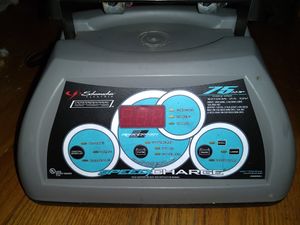 a model SC-7500A after several years of use

The Schumacher SC-7500A is a car battery charger with a segmented LED display and the ability to charge several varieties of 12-volt automotive battery.

After several years of being left out partly under the hood of a car (which it was sometimes charging) and subject to a fair amount of rain, the only problem this unit developed was in the fan – and it seems to have an internal thermal cut-off which has prevented any damage due to heat build-up from the fan not working.