A full service manual for the "110." models may be purchased for download at Dave'sRepair (is this legal? -W) or from Sears Parts. 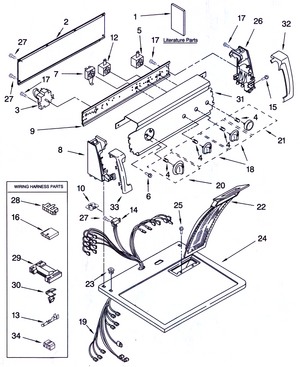 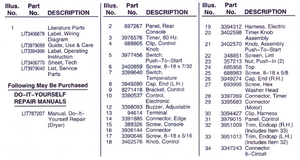 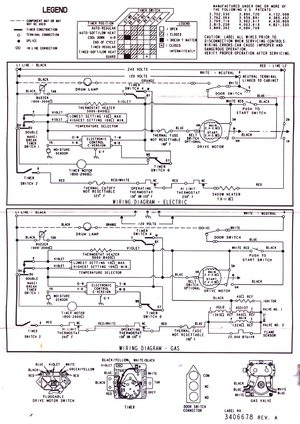 Twice now, the heat cutoff thermal fuse (part # 279816, "cutoff-thermal") has blown, preventing the heat from coming on. The manual does not mention this as a possibility when diagnosing "no heat". The unit should have continuity at normal temperatures. (It essentially "blows" if the heat gets too high, and has to be replaced. This is often due to blockage in the vent pipe, though we're not sure what is causing it in our dryer.) It is located high up on the cowling of the heater coil. To test if it is the only problem, you can temporarily connect its two wires together, bypassing the part -- but do not operate the dryer for more than a minute or so with this configuration, as there will be no safeguard against dangerous overheating.

This part was $26 from Sears in 2010 (sold as a kit with another part which they say you have to install too, but I have never bothered).

Note that the heater coil takes 20-30 seconds to heat up enough so that you can see it glowing (it is visible through a hole in the top of the cowling). A good test is to set the heat to "high" and use the timed dry, which presumably bypasses the moisture sensor (in case that is causing problems).

The manual shows two possible temperature switches; neither of them matches the one on our unit.

And the connections work like this (each cell lists what that terminal connects to in that mode):