The Durham brontosaurus is a life-sized papier-maché, concrete, and wire-mesh sculpture created by Dick Wescott for the North Carolina Museum of Life and Science (then known as the "Children's Museum") in Durham, NC in the late 1960s.

The brontosaurus is located just off what is now Rock Quarry Park on the Ellerbee Creek Trail, behind a damaged chain-link fence (as of 2010, some restoration has been done and the fence may have been repaired or removed).

The sculpture, now somewhat outdated scientifically (need details on this!), has been repeatedly vandalized but remained largely intact until sometime during the night of May 31, 2009 (or early the next morning), when vandals cut off the head. The head was recovered and police identified the vandals; it is not clear at this time what the Museum plans to do. 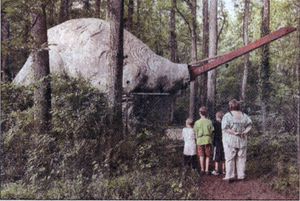 Photo from The Durham News showing the vandalism