from HTYP, the free directory anyone can edit if they can prove to me that they're not a spambot
< US‎ | NC‎ | Durham(Redirected from Shrimp Boats (Durham, NC))
Jump to navigation Jump to search 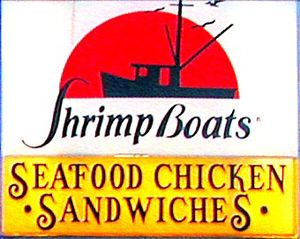 Shrimp Boats in Durham, NC was a standalone fast-food restaurant specializing in fried chicken, seafood, and Southern cooking. It was located on the business fork of 15-501. It went out of business sometime around 2017.

Shrimp Boats may have once been part of a chain, as there was another "Shrimp Boats" located in Athens, GA as late as the mid-1990s with the same logo and sign (albeit more faded than the Durham location's sign) -- by which time that establishment had already begun shifting to a Chinese cuisine. By ~2005, all remnants of the "Shrimp Boats" name were gone from the Athens location.